Hello from New Zealand! We are excited to update you all on our past few weeks of traveling around New Zealand. This post will update you on our week and half in the North Island and then we will be giving you a summary of our trip around the South Island in another few weeks. I will appologize in advance for the overuse of the words “beautiful”, “amazing”, and “incredible” over the next few posts. I will attempt to expand my vocabulary however these are the words that keep coming to mind as we witness the country of New Zealand.

While we are traveling around NZ Lenore and James have been kind enough to let us keep Rainey (Our Aussie Camper Van) at their place in Australia so that we can continue our travels once we return at the beginning of April. So don’t worry, just because we are taking a quick break feom our travels in the camper van, those adventures will continue for a few more months after our New Zealand hiatus.

Carl and I arrived in Auckland, NZ on Feb 23rd. Our first task on arriving was to find a vehicle for our NZ roadtrip. We are hoping to spend about a week and a half driving around the North Island and then approximately three weeks traveling around the South Island. After spending a few minutes looking at the rental prices for vehicles it was an easy decision to buy a car when we arrive and then sell it when we finish traveling with the hope of breaking even in the end. However, buying and selling a car is definitely a slower process than simply picking up the nearest rental and heading out on our trip. The morning after we arrived in Auckland, we started messaging people in the area who were selling hatchbacks, wagons, and vans. Upon inspection, we decided that the hatchbacks in general would be too small to carry everything and the vans would generally be worse on fuel efficiency, so we narrowed our search to wagons. After several days and far too many hours spent traveling back and forth on public transit in order inspect all of the potential vehicles, we finally settled on our New Zealand Travel Machine!

This time in Auckland also allowed us to explore the city which is always enjoyable. Auckland was a nice city, however I have never met anyone who came to New Zealand to spend time in the city, and we were no different. It was a relief to finally have our vehicle and be able to get on the road.

After spending that same day driving around and stocking up on supplies we were on our way. Our general plan was to drive only a few hours a day, camp in our tent when needed, and stay with friends (or strangers) whenever possible. 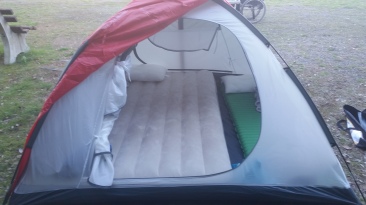 Our first two connections, who we were scheduled to stay with, were on the North Island. You will remember from our last blog post our shout out to our friends at YWAM (Youth With A Mission) who we had the pleasure of hanging out with in Byron Bay. They had connections with some friends of theirs working at YWAM in Tauranga, which is on the north side of NZ not too far from Auckland. We decided to head there first making a two day stop in the Corremandel Forest on the way. The drive along the shore and through the beautiful Corremandel mountains was our first taste of many more days of the stunning beauty of the North Island mountains, hills and beaches. 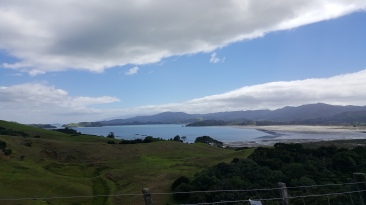 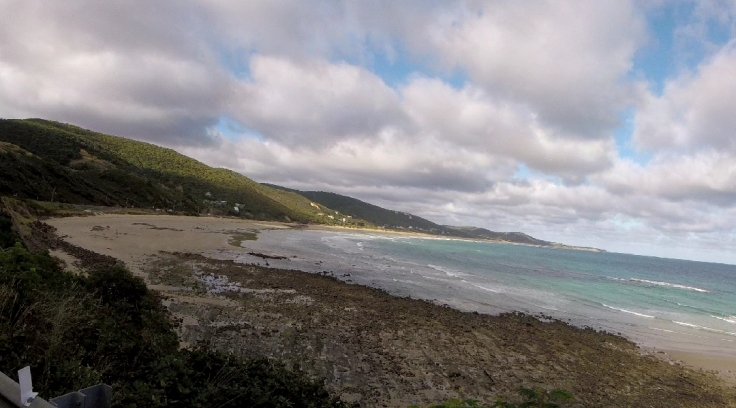 These first few nights in the tent, accompanied by rain, wind, and colder weather than we were used to, took a bit of adjustment.

However, after a quick stop at the local home goods store armed with rain gear and some new heavy blankets we were ready to face the New Zealand weather head on! On Wed Feb 28th, we stopped in at the Tauranga YWAM center. After an impressive back country drive through winding hilly roads in between cattle ranches and kiwi farms (the fruit, not the person or the bird) we were met out front of YWAM’s beautiful campus by Chris, Bradin and Tilly! They are a part of the staff at the YWAM campus and we had a blast hanging out with them as well as other staff and students at the campus. Chris also took us to the best fish and chips place in town, and it did not disappoint! 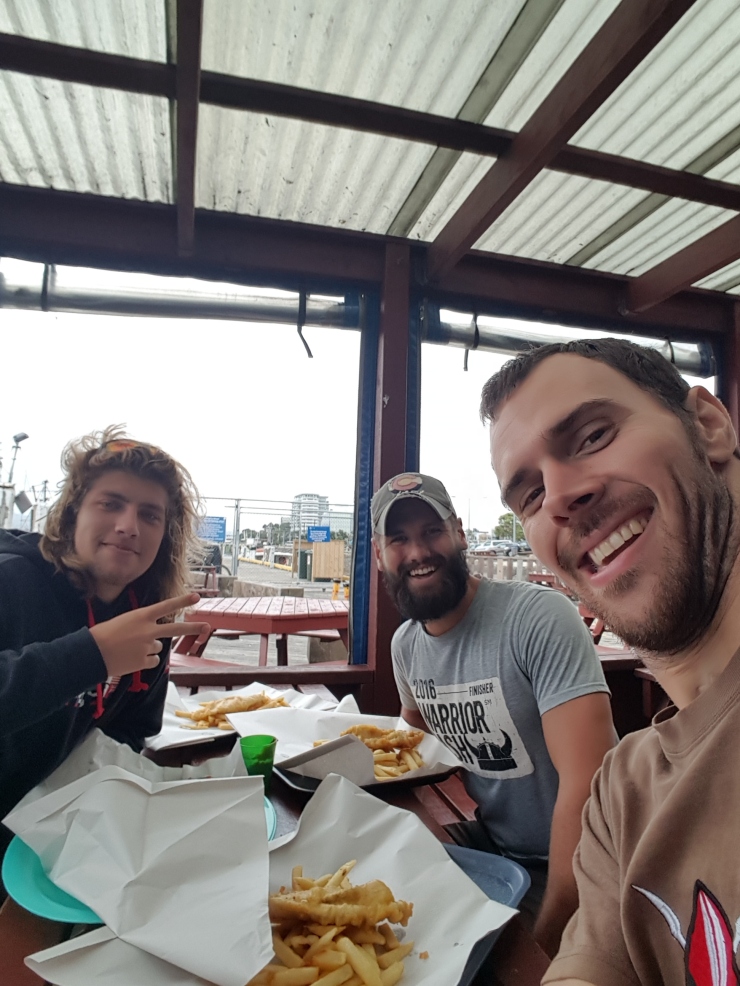 Our plan was to stay at the YWAM campus for one night and then continue our trip, however after very little needed persuasion we were convinced to stay and extra day to join them for the student’s graduation ceremony. It was an honor to be able to sit in and listen to their stories of God’s incredible work in their lives and in the places that they had visited sharing the gospel and the love of Jesus. We were happy to be able to be a part of their graduation (and partake in the ice cream and desert bar afterward!!!) Thank you to the whole group at Tauranga YWAM Marine Outreach for the hospitality and all the fun, we are looking forward to visiting again on our way back through to Auckland.

Our next stop was a connection we had made back in Australia. Dee and Paul are two friends we had met through Paula and Tracy back in the Gold Coast. Dee’s brother, Steve, lives with his wife, Ria, and two sons, Liam, and Elias, just south of Rotorua on their dairy farm. Dee had graciously offered her brother’s place for us to stay, whether he had actually agreed or not we weren’t ever sure, but either way Friday afternoon we were on our way to Steve and Ria’s farm!

The drive up to the farm was a stunning winding drive through dramatic green hills with cliffs and dairy cows spotted throughout. We were excited to find the farm directly in the midst of these beautiful hills with an incredible view on all sides. 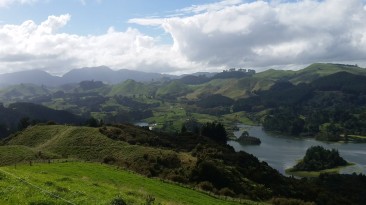 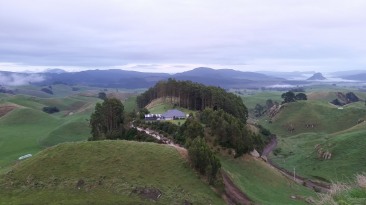 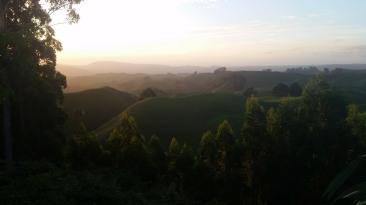 We were scheduled to spend two nights at the farm and then continue south. In the process of traveling it is always a luxary being able to spend time in a home and feel like family. There is something about throwing around a rugby ball in the backyard, cooking breakfast together in the kitchen, or playing a board game after dinner that is just good for the soul (except when Steve and I are Sequence partners, then its just painful!). Time with Steve, Ria and the boys was too much fun to cut short, so we ended up forcing them to let us stay an extra few days. We will also be stopping by the farm again on our way back up. Thank you Uttinger family for welcoming us in, you guys are awesome! 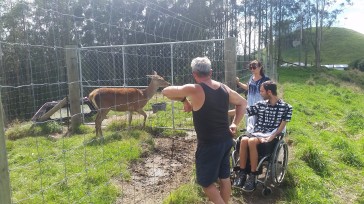 While we were staying at the Uttinger farm we made a day trip into Rotarua. This north central town is best known for its hot spring pools. However, the tourists are easily spotted gagging and holding their breath as they realise that the pools smell of phosphorous (that typical rotten eggs smell). Being a man of pride I attempted to not let on that the smell bothered me, however Carl and I soon fit right in with the rest if the tourists and we decided to move along quickly. The area also contained a redwood forest, several beautiful lakes, and some really nice areas in town to explore.

As we were loving the time at the farm we were also itching to get down to the South Island. For those of you who don’t know, New Zealand is split into two main islands, the North Island is smaller, contains around 77% of the NZ population and consists of smaller mountain ranges and more hilly countryside as compared to the South Island which is well known for the stunning views of the South Alps. In order to transport ourselves as well as our vehicle from the North Island to the South Island we had to take a four hour ferry ride out of Wellington, the capital of New Zealand. The ferry tickets need to be booked several days if not a week prior to the trip, so we booked our tickets but had a few days to explore Wellington before our scheduled ferry ride. With a healthy dose of pouring rain and strong winds, we decided to spend most of our time inside. This allowed us to learn some NZ history while exploring the museum, do some preparatory grocery shopping, and complete some additional planning for our travels around the South Island. In between the rain storms we were also able to find some time to check out some filming locations for the Lord of The Rings movies. It was a combined expression of excitement of being at the filming sites, enjoyment of the beautiful landscape, and a little bit of dissapointment when realizing how much CGI is actually used in some of the scenes. However, it was fun hunting down some of the locations and trying to figure out where exactly specific scenes where shot. 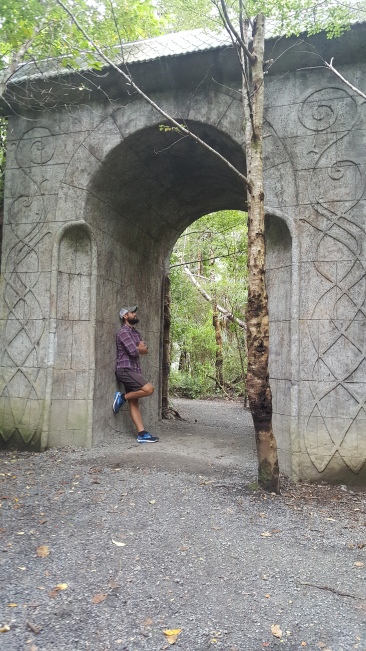 It soon came time to board the ferry and make our trip to the South Island!

As we finish this blog post we have already been down on the South Island for two weeks and we can’t wait to share the amazing photos and stories in our next post, this island truely is an inspiring country!

They say a picture is worth a thousand words, but there are stories that pictures cannot tell. The sadness in a hitchiker’s eyes as he tells of his wife passing from cancer, allowing us to share in his sorrow for a moment. The awe and wonder felt while filling the isignificantly small space between surrounding mountains towering above. A silent night spent on the beach listening to waves crash and staring up at the most incredible star lit night. The meeting of strangers who welcome you in, allowing you to realize how quickly someone can turn from a stranger into a brother. These are the stories that pictures cannot tell, and we are all the better for it. For if we spent our time trying to capture these moments we would miss them entirely.